X-COM UFO Defense, or as it is also known, X-COM Enemy Unknown is a turn based strategy game developed by Mythos Games and published by Microprose in 1994. The storyline is as follows: Earth faces more and more incursions and reconnaissance missions by alien creatures whose purposes are not quite clear (in the beginning). An international project is founded, the X-COM. X-COM's mandate is to find out, what is behind the increasing visits by the aliens, and if necessary, to stop them.

The game is the first in a whole line of games, some not newer than a few months (now, in 2020). It is a well received game, that is however, notorious for putting players patience and tenacity to the test. Especially for beginners it sometimes feels just downright unfair, as under (literally) unfortunate circumstances, the random generator generates situations, that are difficult to master, even on easier level settings. As the original game is from 1994, the graphics looks accordingly old. Newer variations of the game of course changed its technical makeup but also adapted the game mechanics. But the basic principle of turn based strategy is one of the features, veteran players find the most significant reasons for its success.

The game is divided in two different settings. One is kind of a global surveillance, the so-called Geoscape, where you can monitor UFO activity within your radar installations reach. You can control the speed of in-game time passing. Whenever an event happens, the time is stopped, so that the player may chose some sort of reaction to that situation. This can be anything from finished production or research to UFO appearances, landings, alien attacks and the monthly report/assessment by the X-COM funding council.

The other setting is the so-called Battlescape, where the actual turn based strategy game mechanics applies. You can control a number of human soldiers as well as certain automated weapons platforms (kind of small tanks). Your mission types can be one of the following list:

In any case, if you lose all your units, you lose the mission. Depending on the mission type, that can mean only losing scores and a transport craft. If you loos a base defense mission, you lose the entire base.

At this point a hint: For someone who doesn't know X-COM yet, the tech tree should not matter for now. You should have played X-COM 1 or 2 at least once without hints. Otherwise the fun factor might be lost faster than necessary. The tech tree looks like this: 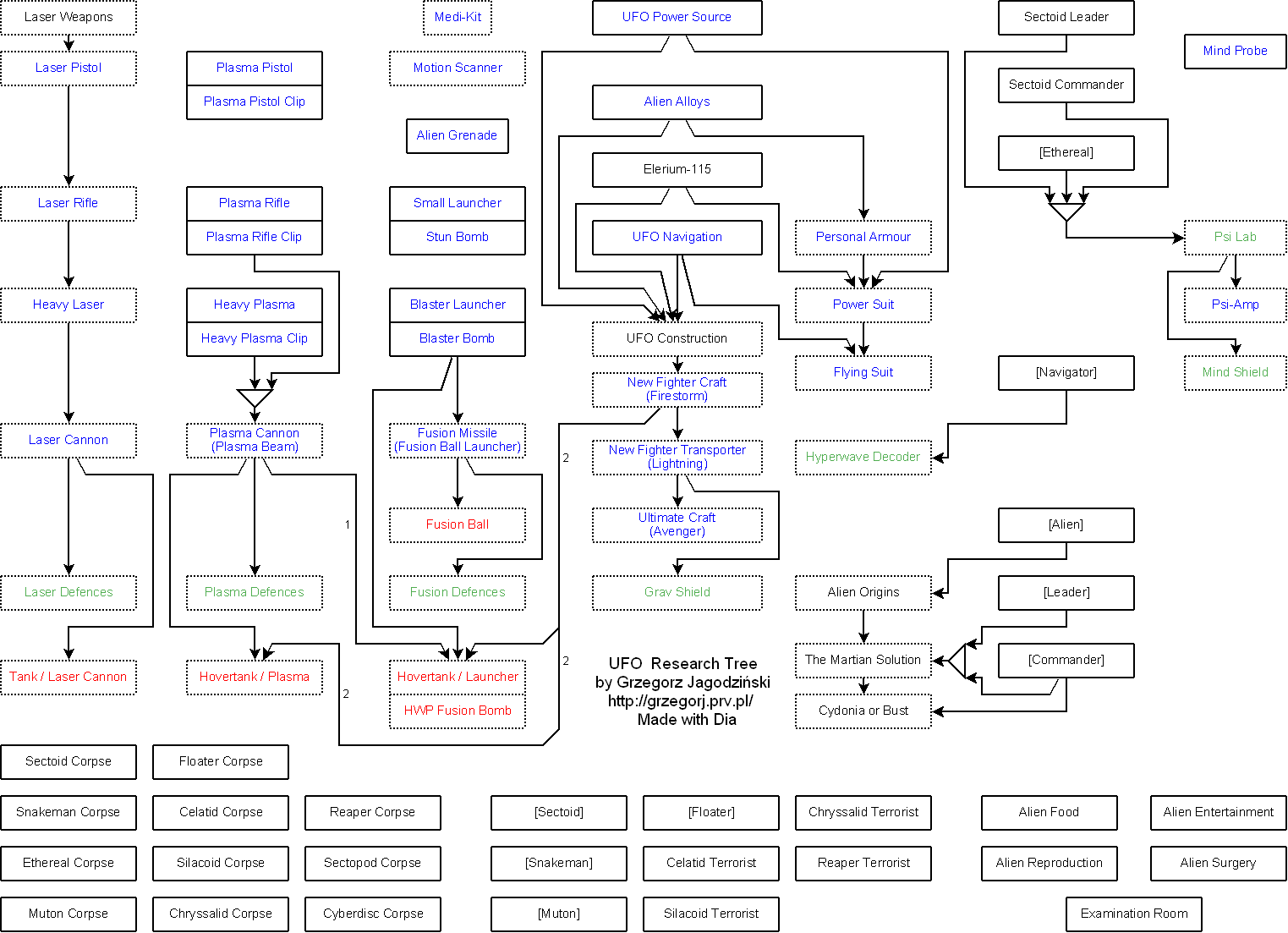 Only Singleplayer and only Mouse Inputs

The game does not feature any multiplayer of any kind. It is strictly a Singleplayer campaign-like game. The original also did not feature keyboard inputs aside from entering text. All the rest of the controls were implemented to be done via the mouse, incl. right clicks (gives you important options on the battlescape).

You can only win the game in one way.

The end-game mission is a trip to mars, where you have to destroy the aliens controlling “brain”. If you succeed, you win the game. If you fail this mission, you lose the game ultimately.

You can lose the game in either one of the following four ways:

The first one was actually never possible, as due to a bug the game never let's you lose the funding of Russia.

In the beginning you start only with human technology, meaning normal rifles, pistols, rocket launchers, grenades and tanks. Same goes for your interceptors and transport craft, as well as their armament. While conducting recovery missions of crash landed UFOs and other missions you encounter different aliens, dead and alive, as well as numerous alien items, such as weapons or materials. Yous scientists can do research on them, improving your situation by adding the alien military capabilities to your own, as well as improving base- and craft technology made by humans. Many researched items can then be produced by your engineers.

An important part is the selling of recovered and produced items. This also includes the ability to build new items and selling them afterwards. Certain items can be used as income leverage, making more expensive items from cheaper ones, or produce items investing only money. Especially in the beginning, money is scarce as the funding nations do not give you unlimited currency. So producing and selling have an important role in the game.

The money itself is spent on production jobs, your staff (soldiers, scientists and engineers), leased craft, and maintenance and extension of your bases. During each month you cannot have negative amounts of money. But if your expenses from base maintenance and salary of staff are higher, than your income + currently possessed money, you can end up with negative money after a month. If this happens twice in a game, you lose it.

An experienced player knows the intricacies and priorities of research, which makes the game easier, once you have played it at least on time to the end. This also allows to vary the game play by emphasizing some strategies or technologies more than other. But as described above, some research elements are a must in order to finish the game successfully.

There are a number of different alien races the player may encounter. Those reign from “classic” small grey creatures to flying and mind controlling species. All of them have certain advantages and disadvantages. They are however, dangerous to varying degree. All of them are lethal when using their weapons on you, but some are more resilient or have other traits, that make them particularly dangerous.

The game makes many references to pop culture, like the grey Sectoid aliens, or a material described as element 115. Also alien abductions and experiments on cattle are incorporated in the games story.

[ Back to the games database ] [ X-COM derived games ]