Especially under Win 7 several games show wrong colors. This may look like this: 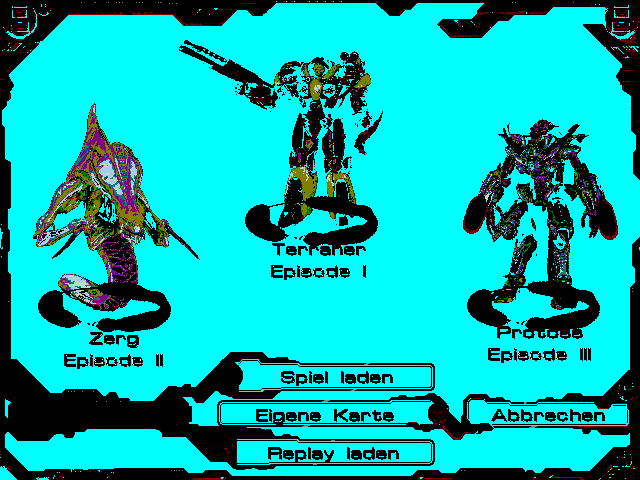 You can clearly see how the palette of the game Starcraft Broodwar does not appear to be set correctly in its main campaign menu of version 1.16.1. Also the rest of the game shows similar problems.

The problem can be solved for most games by stopping the explorer.exe before playing. As long as it is running or restarted, the color errors occur. Therefore it makes sense to point to a batch file instead of the usual program shortcut, which first closes the Explorer, starts the game, and after finishing the game starts the Explorer again. In this way it is relatively convenient to start the game without getting the color problems. A generic variant would look like this:

For example, an init script can have the following structure:

The <game name> is a meaningful name, so that it is clear what happens next. <game executable> means the .exe file, which would otherwise usually be started via the shortcut or directly. Now you can let already existing desktop or start menu shortcuts point to it and assign them the icon from the binary. So the whole thing looks exactly as if everything would run normally, only that before the game the query occurs so that the Explorer has enough time to vanish from memory before the game is started.

Back to the games database