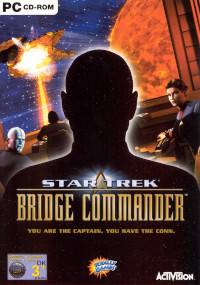 The game was developed by Totally Games and released by Activision on 27.2.2002 in Northern America and a bit later on 8.3.2002 in Europe.

Similarly to Klingon Academy you control star ships directly by ordering bridge crew members. But for the most part you can do everything yourself, incl. flying the ships, firing weapons and setting repair priorities and energy distribution.

After a law suit Star Trek games from Activision were no longer distributed. In the meantime however, STBC is available via GOG once again.

The game is from 2002, therefore it is designed for and will run on XP. Under Windows 7 x64 and also Win 10 the game runs without special measures. It is also easy to copy as a folder, so it does not have to be installed from CD to play. However, in conjunction with the Kobayashi Maru mod the game is really prone to crash when trying to return to the main menu.

Back to the games database